One of the objectives of the LEON-T project is to measure the Health effects of exposure to tire-generated noise. We will focus our study on the effect of tyre noise on cardio-vascular health during sleep studies according to mimic different road scenarios. The noises that will be used are based on the dataset of sounds recorded at IDIADA. The first step is then to identify the different categories of tire noises so that realistic scenarios can be imagined. Those categories will be based experimentally on the perception of listeners to restrain the dataset of noises to groups.  Thus, we need to experimentally define the perceptual acoustic space of tire noise.

53 students of INSA Lyon participated to this experiment. Each student was placed in a soundproof booth, equipped with headphones and facing a computer. 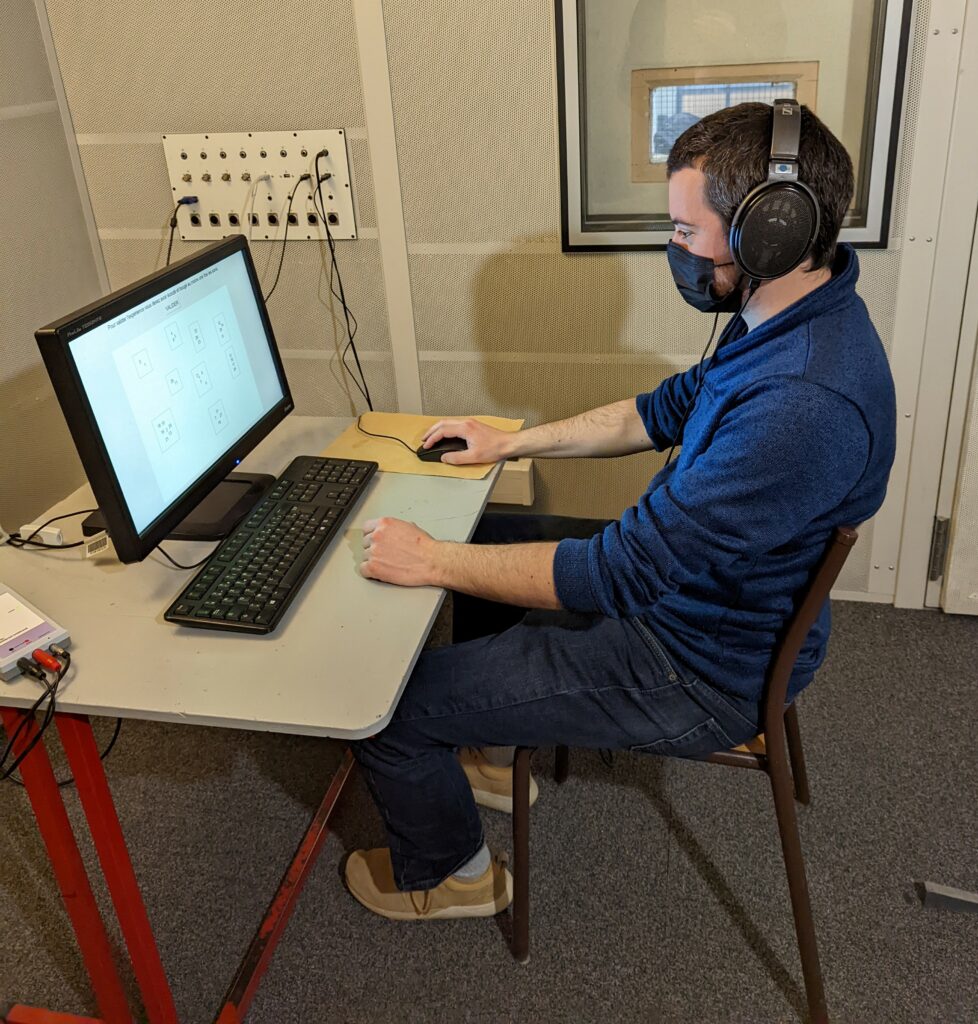 After an audiometric measurement and a brief test (NoiseQ-R) to know their sensibility to noise., each student had to sort sounds. We designed a computer interface so that they could easily and freely sort sounds by groups inside the delimited space formed by the white rectangle. Each number represents a tire noise that they could listen to and move inside the designated space using the mouse. 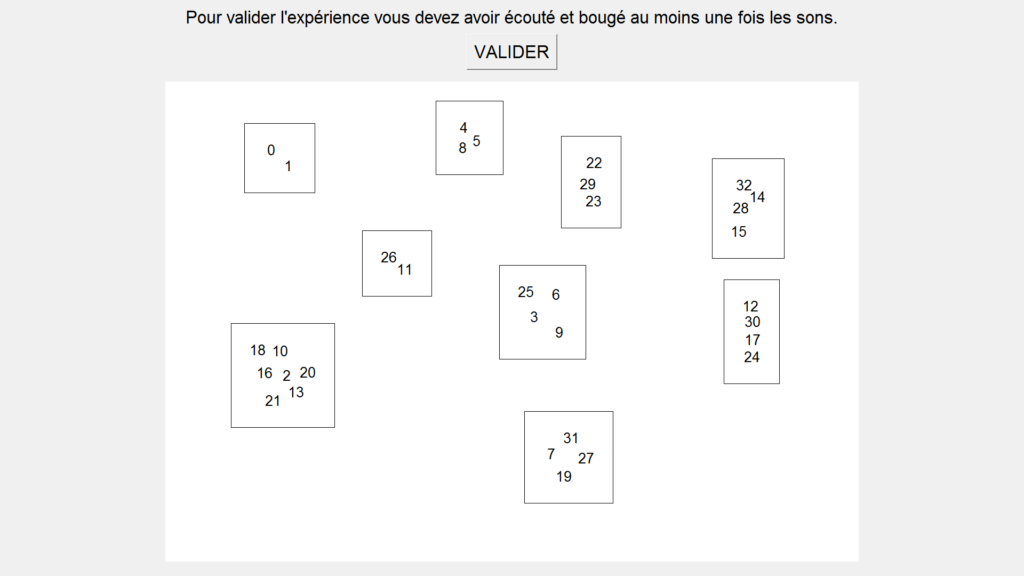 Whenever a number was moved, black rectangles were automatically drawn around groups of number that were sufficiently closer to one another. The task asked to the students was to sort the numbers – thus the noises – in groups which appeared similar to them at the listening (see below a screenshot of the completed task). This was asked twice: for the raw recordings and for the same recordings but filtered to mimic a situation where the listener was inside its bedroom and the vehicle was passing in a road nearby.

The analysis of this first step will allow to see if there are different grouping strategies of tire noises and if the grouping strategy is influenced by the filtration of tire noises. Correlations between acoustic parameters and structure of the perceptual space determined by the formed groups will highlight which parameters are used by the students to differentiate the noise. Finally, the acoustical of the noises will be linked with the properties of the tires (brand, size,….).

This experiment is part of a project that has received funding from the European Union’s Horizon 2020 research and innovation programme under grant agreement No 955387.

This website uses cookies to improve your experience while you navigate through the website. Out of these, the cookies that are categorized as necessary are stored on your browser as they are essential for the working of basic functionalities of the website. We also use third-party cookies that help us analyze and understand how you use this website. These cookies will be stored in your browser only with your consent. You also have the option to opt-out of these cookies. But opting out of some of these cookies may affect your browsing experience.
Necessary Always Enabled
Necessary cookies are absolutely essential for the website to function properly. These cookies ensure basic functionalities and security features of the website, anonymously.
Functional
Functional cookies help to perform certain functionalities like sharing the content of the website on social media platforms, collect feedbacks, and other third-party features.
Performance
Performance cookies are used to understand and analyze the key performance indexes of the website which helps in delivering a better user experience for the visitors.
Analytics
Analytical cookies are used to understand how visitors interact with the website. These cookies help provide information on metrics the number of visitors, bounce rate, traffic source, etc.
Advertisement
Advertisement cookies are used to provide visitors with relevant ads and marketing campaigns. These cookies track visitors across websites and collect information to provide customized ads.
Others
Other uncategorized cookies are those that are being analyzed and have not been classified into a category as yet.
SAVE & ACCEPT
Loading...